I’ve been spending a lot of time thinking about my painting practice and why I paint in the way that I do. Multiple viewpoints of a place often appear in my work, either by design or sometimes they creep in without me noticing. Many of my paintings are about doorways and stairs. So coupled with my, wholly intentional, inclusion of ‘pathways’ through my paintings, there often appears to be a choice for the viewer, as to how the eye should travel through the painting.
I re-visited some of my earlier research of David Hockney’s thoughts on perspective. He famously created Pearblossom Highway, by taking 600 or more photographs along a road in Mexico (?) from different positions (including up a ladder) and he collaged the photographs to create an entirely believable location, which doesn’t actually exist in that form. 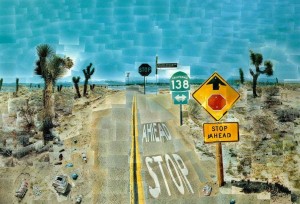 The detail in the picture allows you to see the road sign (stop ahead) as clearly as the crushed Pepsi can on the ground, as if you have tilted your head downwards – because tilting downwards is what Hockney did with his camera.
He has long pursued an enquiry about why paintings became more ‘realistic’ or more like a photograph after approximately 1420. It was thought that the use of lenses was the answer, although no actual lenses were found from early enough to explain it. Hockney explains in an instructive (if self serving!) BBC programme how a much simpler piece of equipment, a piece of glass or mirror and a darkroom can create an inverted image, good enough to trace from. This was therefore be the foundation of a detailed and accurate painting, without the need for drawn grids, which we normally associate with perspective drawing and painting. The drawn grids were a later invention, widely attributed to Brunelleschi, who realised the size restriction of the use of a mirror (a standard 30cm for all images). By extending lines from the drawing (tracing) of the reflected image, he was able to make a larger image than the camera obscura allows. (Khanacademy has made a short film on Brunelleschi’s experiment with perspective.)
Hockney also explains how painters such as Van Eyck obtained sharp detail from the use of a single eye (camera lucida), good enough for him to represent the rear of the couple in the Arnolfini Portrait. Images from lenses are different because they have one eye and we have two and we move around, so the absolute detail of images seen through lenses are ‘too good to be true’.
This research has led me on to a closer look at Vermeer, who many think used the camera obscura because of his competency in handling perspective, and the design of his studio. Some think that his use of the device was more for compositional planning than for direct tracing. The softness of Vermeer’s images and his diffused highlights are reminiscent of the ‘out of focus’ area of the image seen through a camera obscura. A film called Tim’s Vermeer, was made of Tim Jenison’s reconstruction of Vermeer’s studio and how he may have worked.
To go back to how this relates to my own work, I think that, because we are surrounded by photographic images today, we have become blind to them. The painter can offer something different. We are dealing with the materiality of paint and the hand skills of applying it. We can juxtapose one colour against another, we can soften edges, wipe back paint, pour it and splash it. Making a painting is a very physical experience. I want my paintings to invite the viewer to look around the canvas, not to walk past, as I often do with a painted ‘photographic’ representation. That tells me nothing about the painter. This is why I build in a pathway (or two or three) to guide you through the painting. I also resist the sharpness of lines, reminiscent of photographic images, which saturate our culture. In my more abstract work, the collisions of colour grab your attention first, before the soft drifting of colour guides you through additional areas of the canvas.
My paintings are currently ‘under wraps’ until the degree show, but here is another snippet from a painting, which I have been working on: 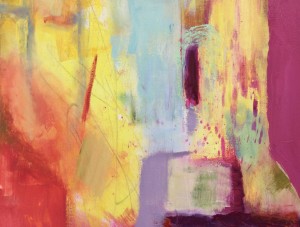 There is a mauvey-grey, which is part of one of my ‘pathways’ and links to the same colour elsewhere in the painting.
Also, Check out my photograph of the camera obscura, which I made using two shoe boxes! It actually works! Forgive my excitement, but I went to an all girls’ school in 19**, so science was rather basic for us. 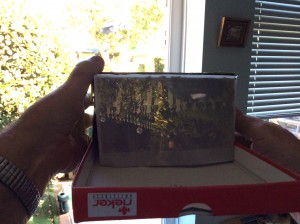 Camera Obscura made out of two shoe boxes

Inside the shoe box you can see the upside-down image of my herb garden, projected onto the tracing paper, which I taped to the inner shoe box (the one which slides so that you can focus the image).

Come to the degree show at artOne from 9 September to 15 September to see more of my work and that of 11 other excellent artists.

I am in the last stages of my MA now and am busy preparing for my exhibition at the university in September. I need a coherent body of work, which will look good hanging together. I have been using some standard sizes and thicknesses of canvases for a while now, all beautifully made and primed by Sophia Alexander-James. This means that I will be able to choose from the latest paintings, knowing that the canvases won’t be a distraction.
This is the space I work in – it is rather messier now as I am working much more with canvases on the floor and pouring and splashing paint 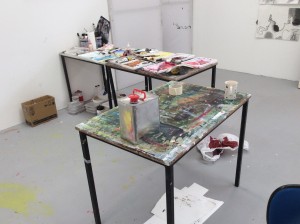 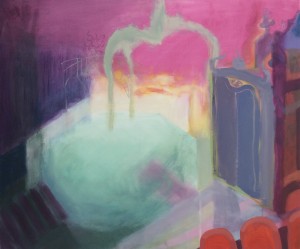 This painting has some good qualities but I am unhappy with the area to the right and may yet attempt to resolve this. July has seen me ‘mining’ this painting for new paintings and in particular using a heightened version of the colour palette. I am not ready to show these paintings until the degree show (my equivalent of Press Night) but I could reveal some snippets 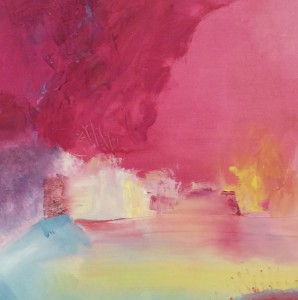 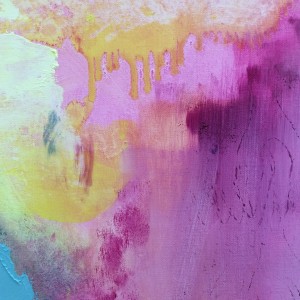 Alongside the practical studio work I am drafting my 2000 word statement on my latest work and I am beginning to prepare for my seminar, which has to be given to my tutors and others on 8 September – not far off now!

I visited Stratford at the weekend and saw Susan Stockwell’s installations at the RSC. She is nearing the end of her one year residency at the RSC. I was particularly interested to see her work. Not only is she a very successful artist, but she was my sculpture tutor at Farnham and she progressed my thinking about sculpture significantly.
The Paccar Room was open, where Susan has made a smaller installation based on Sail Away, which was in the Turbine Hall at Tate Modern. 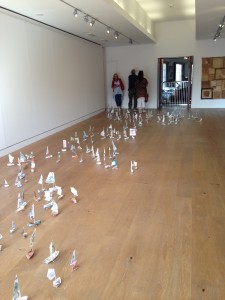 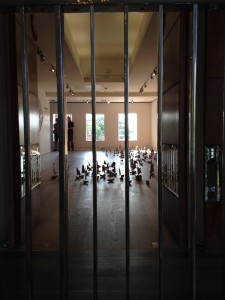 Susan’s work is about trade and maps and the use of much handled currency for the sails of the boats is entirely appropriate.
See the University of East London’s video to see Susan making boats for the installation
Sea Markings
The site specific installation of sails above the foyer cafe is very powerful and again Susan has used second hand (much used) sails and also she made some sails out of used commodity sacks 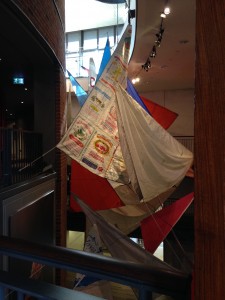 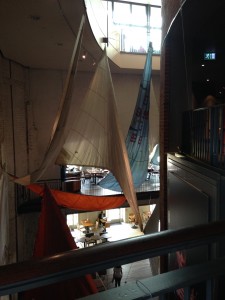 I love the way that you can see a tiny person sat at a table in the cafe in this photo.

As for my own work, I am working intensively in my studio now preparing for my finals (late August) and the MA the degree show starting on 9 September in artOne.
I shall post some snippets of my work soon.

Today was the day to paint in the foyer at CFT. I wanted to re-engage with being in the theatre as I have spent June in the studio and on the final lectures and tutorials of my MA at the University of Chichester. As ever, Sophia Alexander-James was there to help me with the lifting and carrying and setting up and clearing away. She also makes and primes my canvases, which osteoarthritis prevents me from doing myself. I have no strength in my thumbs and wrists. Even drawing or any other fine movements with my hands can be painful. Sophia also filmed the painting session for me on a video camera. I also tried an experiment, to use my i-Pad to take a time-lapse video, which was successful for a few seconds and then something interrupted the filming and when it re-started, hilariously, the lens was facing in the opposite direction to where I was. I am able to find it amusing, only because of what it actually recorded. The flickering light on the tables and chairs and the wind blowing the foliage outside is truly beautiful. What a bonus!
Here is the link to see the video. https://vimeo.com/user25569393 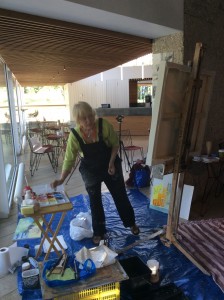 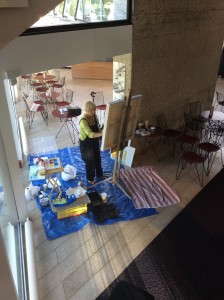 And here is what I was painting: 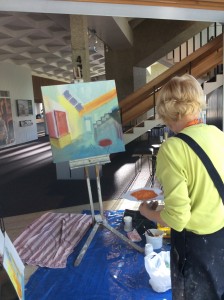 This is only the start of a painting. There is much more work to do.
I also had a warm-up time before starting on this painting on a much smaller canvas, working from some earlier drawings.The painting is visible on the floor behind me in the first photo. 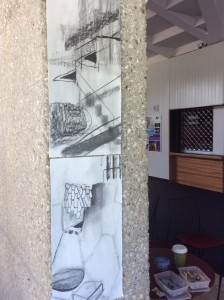 I used acrylic paint on both canvases, not my usual choice for painting, but working in oils on location is not very practical. The issues I have with acrylic paint are that mostly, the pigment is much less dense and dries very flat looking. This is fine for underpainting. Acrylic paint dries very quickly and I struggled at times this morning with the paint ‘setting’ before I had finished putting it on. On the second (square) canvas I painted water onto the canvas first to help with the drying time. I always use acrylic medium too as this helps with the loss of brightness of colour as the paint dries.
Here is the link to the time-lapse video of me painting in the Foyer:
https://vimeo.com/132906147
This is the painting after editing and re-working in the studio, using oil paint. There may be further changes too. 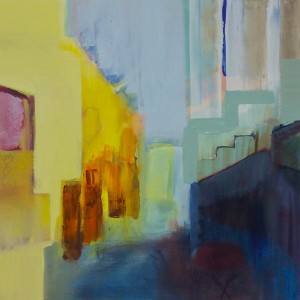 A trip to the Royal Academy Summer Exhibition was the start of my day in London. Jim Lambie’s installation on the staircase up to the Wohl Central Hall was amazing: 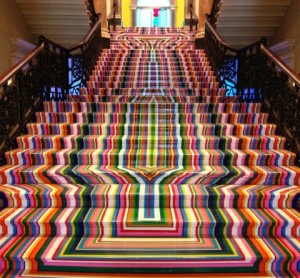 I was excited to see Pippa Blake‘s painting The Rehearsal, which resulted from her residency with CFT, observing Pitcairn. 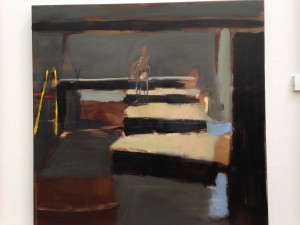 The Rehearsal by Pippa Blake

Check out Pippa’s website for a better photograph than mine!
Oh, and did I mentioned that I was overcharged by 49p when I spent a penny in Victoria Station? 50P!!! It makes you want to get your money’s worth.
Visiting exhibitions is such a good opportunity for artists to step away from their own work and see what other artists are doing or have done in the past. It may seem like a luxury but I see it as essential nutrition for the working artist, even if you stumble on some junk food on the way.
The Sonia Delaunay exhibition at Tate Modern was equally rewarding. I had no idea of the scale of some of her work. Seeing someone’s work only in books can be so misleading. Her devotion to colour ticked all my personal boxes too. By contrast Agnes Martin‘s paintings use colour but at the most subtle level and seeing the two exhibitions on the same day was very interesting. I noted that there were not many men looking around the Sonia Delaunay – but rather more in the Agnes Martin exhibition. Draw your own conclusions.