I’ve been working in artOne in a fabulous space that is allowing me to do some large scale work on the floor. This is my first large painting on paper – made with acrylics which are drying far too fast because of the heat in artOne, but I am learning how to work with it. I have a water spray which helps and screen printing binder which stops the paint from going dull. 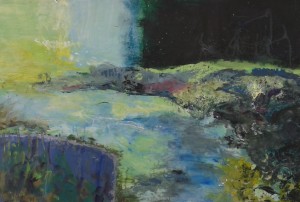 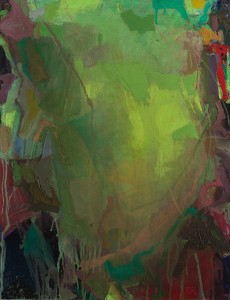 accessed 27 June 2014
Not for the first time, Brian Rutenberg talks about ‘disappearance’ in painting – he is a landscape painter but he paints until the image of landscape disappears. This is such a helpful comment to me at the moment. I am starting to ‘get’ this and see how it could happen in my paintings – in fact making something appear, without trying is also starting to happen.

Brian also talks about William Edmondson in this episode

Heather Duncan’s paintings are joyful representations of the landscape. I liked her compositions, especial one painting with a dark sky and light ground, called At the top of my World. 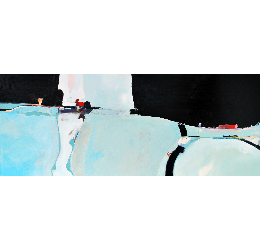 She created a clever cruciform with a wide light area going up to the top of the painting and then a narrower dark area going down to meet the bottom edge – very effective.

Her painting called Tamar was the best interpretation of the viaduct that I have seen – so often it is quaint and twee. It is an exciting painting and I like the use of colour – I found there was too much in the painting for my taste, but again I liked the way she had created a kind of a grid – a pattern emerging here. 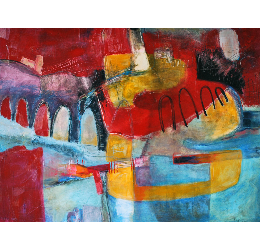 The promotional material for the exhibition showed another grid based painting: allotment 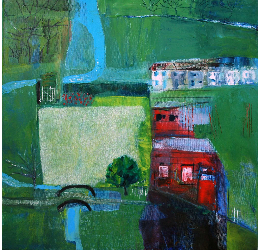 Visited Ashley Hanson who was operating a 3 week Open Studio in Shire Hall, instead of working in his usual space – his garage. His paintings were large and colourful and for me, very appealing. His use of complementary colours was excellent. I also like the way he used aerial vision and then subverted it with upright depictions of tall buildings. The City of Glass series is based on a detective novel written about Manhatten. Ashley lived in New York for a while.

The grids in the paintings are road layouts, the people represent people in the book. It’s a very interesting approach to finding source material for paintings. He showed me a diptych, each painting with a figure carrying a case, and seen from behind. They represented two characters in the book who were seen leaving a train. 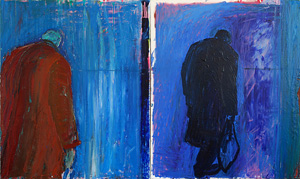 Both characters fit the description of a man that the detective was meant to be following. The paintings are about the choice which character should be followed. The arrangement of colours and composition of the paintings lead the viewer to favour one choice rather than the other.
Ashley told me that he always works with two complementaries and one other colour in his paintings. He certainly has excellent sensitivity as to which red he puts with which green. He was achieving the Hans Hofmann effect of push and pull.
Ashley had been exhibited in the National Open at Chichester – not sure which year.

271 Years Before Pantone, an Artist Mixed and Described Every Color Imaginable in an 800-Page Book | Colossal.