Leaving Crow’s Hall Farm
It’s the end of an era for me having packed up my studio in Lavant, which was very generously proportioned and a luxury I couldn’t perpetuate. Here it is looking very sad with no paintings on the wall and everything packed away. 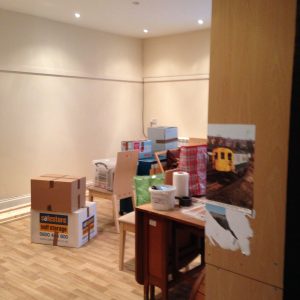 Lavant Studio – all packed up 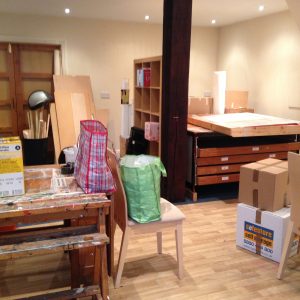 Lavant Studio – all packed up

A new studio!
Fear not! I have a new (smaller/cheaper) studio in Almodington. It is closer to home and I won’t have to cross the dreaded A27 to get to it (phew!). The new studio is still being prepared but the move has physically taken place now. It has been a timely opportunity to review my work (and find some of it!). I have cleared some of the old work, sold one or two pieces and am ready to think about future work.
Painting Practice
My painting practice has had several months of interruption now but I have continued with drawing interiors, mainly at Pallant House. Stairs, doorways and now chandeliers are at the heart of my interest. The subject is still centred on transition and Janus – the Roman god who looks both ways. Staircases offer a great opportunity for looking at the space you are leaving and the space you are about to enter. 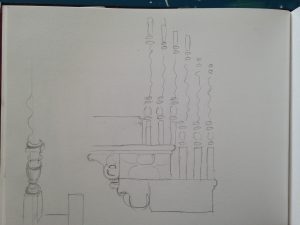 Details from staircase at Pallant House 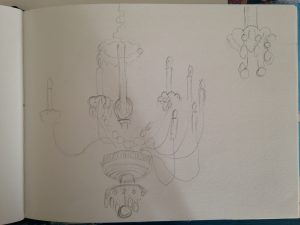 Teabag Diary
My teabag project continues (more information on this in earlier posts) and has been another source of practical work whilst the, surprisingly lengthy, packing up of my studio took place.
Having been utterly blown away by William Kentridge’s stunning Thick Time exhibition at Whitechapel Gallery, I am severely prompted to think about how I can make my own teabag project stimulate all the senses.
A return to Painting
I am so looking forward to returning to painting after this enforced ‘paint fast’. I can’t wait to get organised so that I can wallow in some paint again.

It’s been a couple of months since I gave an update on the Teabag Diary project. I now have 4 months worth of dried teabags and 6 jars of dried tea. These were collected from our tea-drinking at home, at the studio and also when camping.
Today I was able to get my original Teabag Diary (1999) out of storage and take some photographs of it. The piece(s) is very fragile. It is also a lot smaller than in my memory. I thought it was quite a project at the time of doing it. 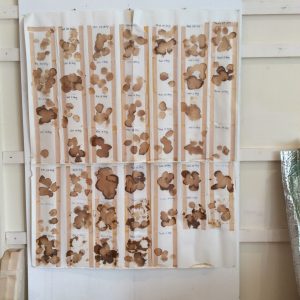 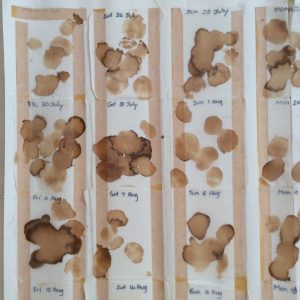 I can now see that it was a ‘good start’ but needed progressing further. Seventeen years later is rather a wait, but I am happy to have embarked on a new Teabag Diary: ‘A Year of Drinking Tea’. I shall soon be trying to find a suitable location to display the work(s). 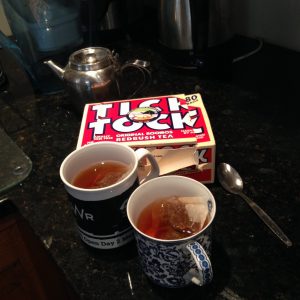 To return to my original tea bag diary, I was disappointed at how the double sided tape had discoloured so badly. On a positive note at least the staining does not clash with the tea stains – rather they may enhance them. Lesson learned on using the wrong materials however! I also used masking tape to join the sheets of backing paper. Why on earth did I not find some suitably sized paper in the first place? I have executed a couple of small repairs just to hold the sheets in place but I need some advice on how I can preserve the work for the future.

It is interesting to note that both projects are about ‘time’. The diaries create a record of how much tea we drank in a day (for the 1999 diary) and by the month in the current diary.

My original plan for the current diary was to keep each month’s collection of tea bags separate. In practise I have done this for the loose tea collected from the bags and our teapots. Once I had decided to stitch the empty tea bags together, I made the judgement that I would need quite a few months’ worth of teabags in order to make a ‘statement’

As I am in the process of packing up my Lavant Studio, I am keeping my stitched teabags as modules of 2, 4 and 6. This means that they can still be stored flat very easily and won’t be damaged. I laid out the modules which have been stitched already onto a board to get an idea of how much more I might need to do and to see the impact that the teabags make. Not all bags are exactly the same size so the piecing of the teabags will be quite tricky for the final piece. 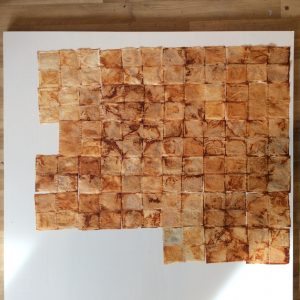 Future Art Practice
The teabag diary does not replace my painting and drawing practice, but sits alongside it. It is not my first venture into recording the waste products of daily domestic life. I have also unearthed a series of photos the I took on a daily basis (probably 2004) of the waste peelings and probably teabags from my daily food preparation. Yet again, the work is about the passage of time and the evidence of the household consumption. We were a bigger household then, with two daughters living at home too.

I have taken the opportunity to re-visit a project I did back in 1998: a teabag diary. I still have the piece, which records on a small square of muslin, each day’s tea stains from used teabags. The study demonstrated that on days when we were out for most of the time we had fairly clean muslin. By contrast, we had deeply stained muslins on days when we had visitors or life was a bit OTT.
I find the quality of paper used in teabags, very tactile and appealing. The staining from the, mostly redbush, tea that I now drink, is beautiful. 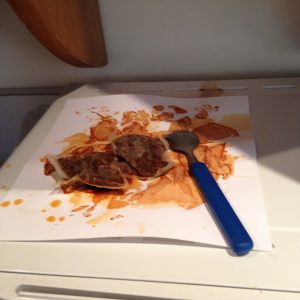 The New Teabag Diary Project:
I dry the teabags and then cut out the tea, saving the empty bags. For what purpose? The amount of ‘waste’ tea is fascinating and accumulates daily, in jars in my kitchen. The sheer quantity of tea that just two of us are consuming is surprisingly high. The empty teabags beg to be stitched together in a quilt form and so I join together pairs of bags from each day’s harvest of teabags. Perhaps a quilt will follow. 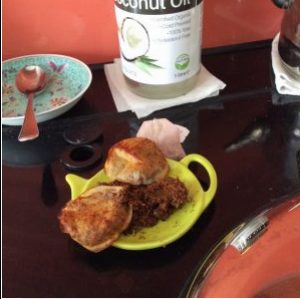 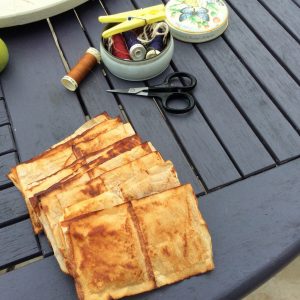 I think that, by publishing this, I now have a prod to persuade me to continue this project alongside my continued painting practice.