I have had a fabulous two months as part of my residency at CFT, watching sets being built, observing a variety of rehearsals, meeting production companies and more. I have gathered a wide range of drawings and I now need time to reflect and progress my resources, as a preparation for the final stage of my Fine Art MA. The MA Fine Art students will be moving into studios in artOne just as soon as the degree show comes down and we can start to consider what we will be making for our degree show in September.

Today has brought to a conclusion a series of paintings based on Oaklands Park House. These are the paintings which have been inspired by the house: 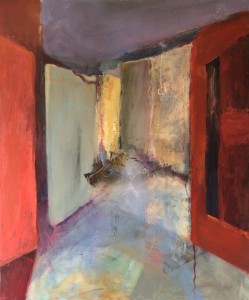 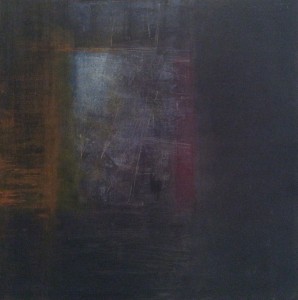 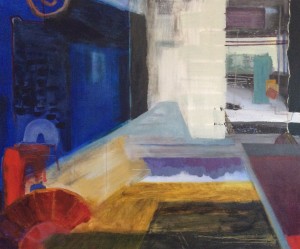 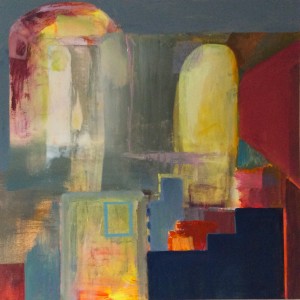 These are two of the paintings in situ. We are not the First, hangs in the main entrance area to the house and is the first thing that you see on entering the house. 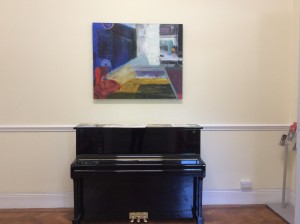 We are not the First, hanging in entrance hall

Time lapse video of starting the painting in the basement
This smaller painting was very much inspired by Basil Beattie’s work on doors and the Roman god Janus, who is the god of doorways and looks forward and behind. The basement space where I was drawing and painting has a doorway at each end of a dark corridor and I wanted to depict this in at least one of my paintings. Only today, Jim Macey, who works in Oaklands Park House, has shown me that in the core room of the house, behind the entrance hall where my painting Basement 3 now hangs, is a depiction of Janus in the decoration on the fireplace. 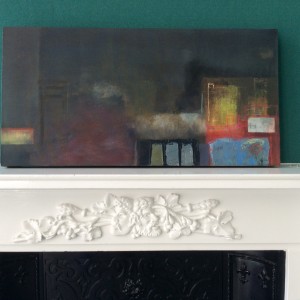 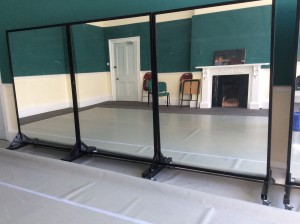 This final photo is taken via the mirrors in that core room, so that we are ourselves looking ahead and also behind us.

It is a great privilege to be allowed to observe rehearsals and I am grateful to Jeremy Sams, Director, Ba Penney, Stage Manager and the cast for making this possible for me. I was excited and very much challenged by the prospect of being able to draw not just the set for The Rehearsal, but to sketch the actors. I do not consider myself to be in any way a figurative artist so this was a real challenge to me. However, I focused on the costumes and outlines, which is my usual method of making observational drawings. 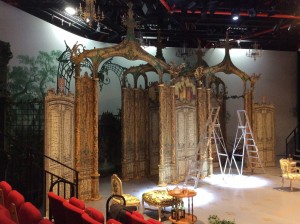 The set, designed by William Dudley, could not have matched my interests better – it was full of intricate archways, trellises, doors and hanging lamps. I could not wait to draw it. During the tech rehearsal there were several unexpected (for me) lighting changes, throwing up shadows against the backdrop and changing the dimensions of the spaces. It exactly replicated what I want in my paintings and drawings: repetition of shape and image, changes in scale and dark shapes set against light backgrounds followed by the reverse – light shapes against a dark background. I just couldn’t draw fast enough! Listening to the baroque(?) music also created an atmosphere as I frantically drew. 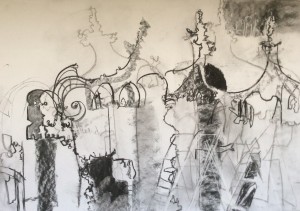 After lunch that day the actors rehearsed and so I sketched them, attempting where possible, to indicate where they were in relation to the set and the auditorium. At least the set and seats did not move, whereas obviously the actors did move for much of the time. 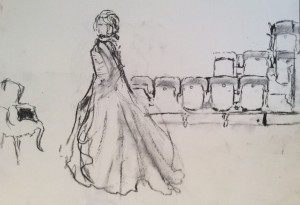 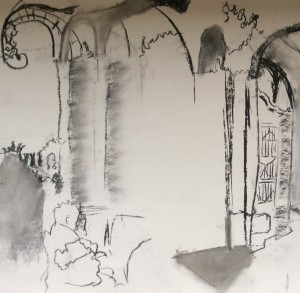 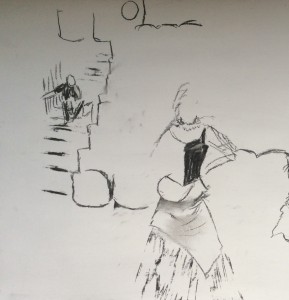 I snatched glimpses of them – hoping for a few minutes without movement. I was shuffling a drawing board and two sketch books, working on several drawings at once. 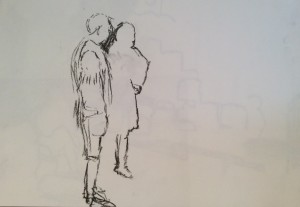 Eventually osteo-arthritis caught up with me, and my hand, now claw-like, had to be rested, which allowed me to enjoy the acting and plot, which had partly escaped me through the deep concentration of observing the cast. I find the theatre timeless and was desperately hoping that the parking warden for Northgate car park was equally timeless as I realised that I had long overshot my parking ticket.

I had a second opportunity to draw the cast on the day of the Dress Rehearsal – Still on a steep learning curve for this new way of working, I noted to myself not to sit above any lighting again when wanting to look down at the stage and still be able to draw. Even though for much of the time I do not look at my paper when drawing, there are times when I want/need to. I could see the stage well enough, but not my drawing board because of the glare from a reflection from the floor below me. I reminded myself that this residency is not just about the outcomes in drawings and paintings, but also the experience of being part of the inner workings of the theatre. 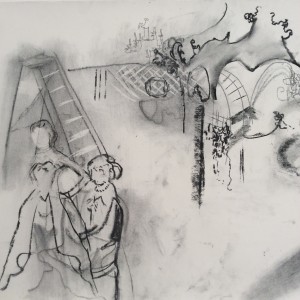 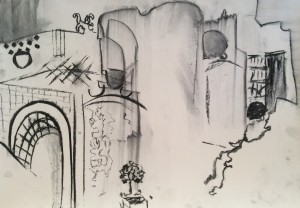 It’s Open Studio time again in Chichester.
I am Venue 101 on the Chilgrove road just north of Lavant
I have paintings from Oaklands Park House:

and drawings from Chichester Festival Theatre: 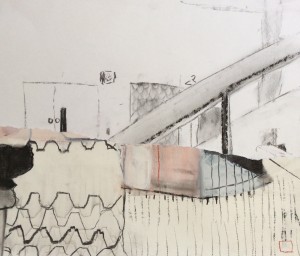